Don't you have sweeping to do?

Marty is the good-natured and jovial butcher who runs Green Meats, a store that was passed down to the Green family for generations. He is hardworking, mostly working by just himself (even on extremely busy days).

He is also shown to care a lot about his community, even to the point of running for city councilman after the incumbent did little to nothing to fix a giant pot-hole outside of his butcher shop.

Marty Green is a big man, with brown hair glasses a big nose and wears a Butcher outfit, He has grey hair in Hey Arnold! The Jungle Movie.

In "Mr. Green Runs," Mr. Green becomes a councilman of the city. He is a dedicated butcher and a politician. The movie revealed that he had two brothers named Dave and Benji, and a son who, ironically, is a vegetarian. He's loosely based on Ernest Borgnine's titular character in the film Marty. 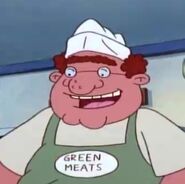 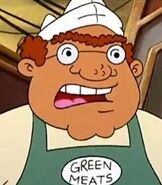