Lou Rawls
Harvey is a fictional character in the Hey Arnold! TV Series.

He is the neighborhood mailman.

Despite being voiced by a very popular singer, surprisingly Harvey didn't do much singing during the series run, although he does play the trumpet (in the movie, at Blockapalooza). He's not the most chipper of Hillwood's residents, but he seems to have a fondness for kids, in instances such as when he motivated Gerald to ebrace his voice and sing in the recital (Gerald's Tonsils), or when he paid for the Chocolate Turtles that Timberly ate because of her story and honesty (although that may have to do with morals as well). 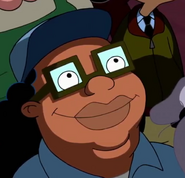 Add a photo to this gallery
Retrieved from "https://heyarnold.fandom.com/wiki/Harvey?oldid=76932"
Community content is available under CC-BY-SA unless otherwise noted.