Hey Arnold Wiki
Register
Don't have an account?
Sign In
Advertisement
in: Minor Characters, Characters, Students of P.S. 118,
and 8 more

Big Gino is P.S. 118's mob boss (although he's more of a parody) and loan shark. He loans candy to kids, but one should be careful when dealing with Big Gino unless they're absolutely sure they'll be able to pay him back, because he has eyes and ears everywhere, and he's not afraid to make things messy. One notable deal he made was with Sid, who was unable to pay Gino back, and Sid became a member of his crew to pay off the debt. Sid soon paid off the debt, but he continued to work for Gino, which concerned his friend Arnold. Gino, perhaps to test Sid's loyalty, ordered Sid to give Arnold a "swirly", and take a picture. Sid ultimately was unable to do it, so Gino had his goons give Sid a swirly, and take a picture.

He later appears in "Gerald's Game" as loyal number 2 to P.S. 118's king (of the group that played the game "The King Rules"), Gerald. He seemed to really be loyal to Gerald, as he spoke highly of him even when he wasn't present.

He’s Italian-American and he speaks with a New York accent. 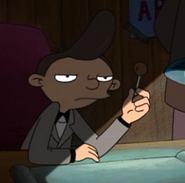 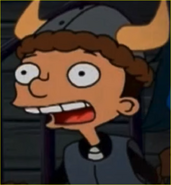 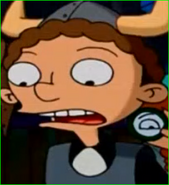 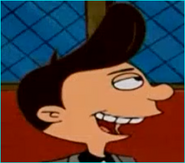