Hey Arnold Wiki
Register
Don't have an account?
Sign In
Advertisement
in: Main Characters, Shortman, Arnold and his classmates,
and 13 more

Arnold Phillip Shortman is the main protagonist created by Craig Bartlett. He has featured in claymation shorts and comics, but his main role of the Nickelodeon animated television series Hey Arnold!. He is Gerald's best friend and, as of Hey Arnold!: The Jungle Movie, Helga's boyfriend (beforehand, he was secretly the object of Helga's affections).

Arnold was created in 1985 by Craig Bartlett, who was also responsible for the clay-animated Penny shorts on CBS's Pee-wee's Playhouse. The original Arnold was visualized as a rich, prep school kid with a vivid imagination, who always wore a prep-school uniform and his signature cap, and was rendered in clay in a series of shorts, one of them televised in 1991 on PBS Kids Children's Television Program, Sesame Street, and continued to air there, even after the Nick version debuted.

In 1991, the Hey Arnold comic stories, written and drawn by Bartlett (who's also a comic book artist), were published in Simpsons Illustrated magazine (Bartlett is the brother-in-law of Matt Groening, creator of The Simpsons).

The familiar, cel-animated Arnold came about in the mid-1990s when Nick picked up the new series. In the TV series, Arnold is a optimistic, chill, nonchalant 4th grader who lives in a boarding house with his paternal grandparents, Phil and Gertrude. Apart from the animation style, Nick's Arnold now wears a sweater, with his plaid shirt untucked (often mistaken for a kilt). Only Arnold's beloved cap remained from the original wardrobe. He no longer wore a school uniform in the TV series because he attends a public school. Now he wears a dark blue jacket to go with his outfit.

Even for a kid, Arnold is notably small in stature compared to most people his age, being shorter than a good deal of his school friends and classmates. His most notable physical quality is his head is shaped like a giant American football (or a rugby ball), thus earning him the nickname "Football Head". In earlier episodes, his head looked longer and more like a blimp, before settling for the current design. He has yellow hair with a tiny blue hat in the middle. His normal attire consists of a teal sweater over a long-length red plaid shirt (which often is confused for a skirt), blue jeans, and black shoes.

Arnold has green eyes, as stated by Helga in "The Little Pink Book" and shown in Hey Arnold! The Jungle Movie.

Arnold is the only child of Stella and Miles and the only grandson of Phil and Gertie.

In The Jungle Movie, Arnold wears a dark blue jacket on top of his previous outfit, and his shoes are now red and white Converse sneakers. He's also slightly taller, as his plaid shirt no longer looks like a skirt. His outfit during the field trip to San Lorenzo consists of a blue t-shirt with a teal border and sky blue stripe, red plaid shorts, white socks, and brown shoes.

In the pilot, his sweater is orange and his undershirt is blue. He also wears pale red (almost pale pink) pants and light blue shoes.

Arnold is a calm, nice, kind, optimistic, upbeat and smart idealist who always sees the best in people despite how unkind, outlandish or sneaky some of them maybe. Although he's usually a pacific kid, he has his limits and can be a bit irritable when he's pushed too far.

Arnold has a natural gift for giving advice and guidance to others. He often goes out of his way to help others (whether kid or adult), giving them advice when he runs into them, helping them overcome their issues, or help them see the error of their ways. This trait is likely inherited from his parents, who were humanitarian helpers of jungle communities.

Arnold's personality somewhat changed throughout the series. In the earlier episodes, he was a daydreamer and tended to lose focus. And while in earlier seasons he was a regular kid with a moral conscience and a good heart that sometimes made mistakes, at around with Season 4, his character traits of optimism, giving advice, and being the voice of reason became much more pronounced. The episode "Deconstructing Arnold" more or less lampshades this change in Arnold. The last two episodes and the films somewhat revert him back to his original self.

Arnold resides in a boarding house called the Sunset Arms and goes to an elementary school simply named P.S. 118. Arnold's excellent upbringing is due to the way his paternal grandparents and boarding house residents raised him. He's a respectable young gentleman at home and at school with his peers and teachers.

Arnold has often been shown to be dense and blind when it comes to romance and love. For example, he never figured out Helga was "Cecile" in "Arnold's Valentine" (even though it was obviously her), and he doesn't seem to process Helga's incomplete love declarations in "Grudge Match" and "Arnold's E-Files", or question some of her actions involving him. Furthermore, he continually refused to accept that Lila Sawyer didn't return his feelings despite being told so repeatedly. Sometimes, Arnold is shown to be a bit shallow, as he only liked Ruth and Mary Margaret because they were pretty and didn't take time to get to know them.

Jazz music is his favorite genre. He is a self-taught harmonica player and plays music a few times throughout Seasons 1 and 2.

Arnold's bedroom is full of interesting technology: a remote control that commands everything in his room, a powerful computer and a collapsible couch. His entire ceiling comprises an expansive skylight that includes a trapdoor where people on the roof can come in. Most of his room is blue since it's his favorite color.

Arnold is a natural athlete with impeccable baseball and football skills; he's often playing sports with his friends at Gerald Field.

Arnold also has impressive skills in video editing as seen in the episode "Freeze Frame" and Hey Arnold! The Movie.

Though his religion is never explicitly mentioned in the show, it is implied that he belongs to the Roman Catholic faith in a comic titled "Arnold Eats His Dinner". He is involved in a prayer which includes a mention of the Holy Ghost (God). He is also seen attending church in "Arnold Escapes From Church."

Arnold was named after his mother's father. The name Arnold is of German origin, and stands for "the eagle rules" or "strong as an eagle."

Craig Bartlett said in a 2004 chat, and confirmed in a 2016 interview with Buzzfeed, that Arnold's second name is "Phillip", after his grandfather.

Arnold's last name was never properly revealed on the show. Throughout the series' original run, the mystery surrounding Arnold's full name became a running gag, with the last name almost being revealed, then someone or something interrupting or otherwise preventing it from being heard (much like the state Springfield is in on The Simpsons). Some notable occasions when the name is almost revealed include:

Series creator Craig Bartlett had planned to finally reveal his last name in the second feature film for the series, Hey Arnold! The Jungle Movie. However, the low gross of the first film led to the cancellation of this second film. Years after the cancellation, Bartlett revealed in a chat that Arnold's last name was also a nickname, and Grandpa was the character that said it the most throughout the series. As his Grandpa's nickname for him is "short man", many were led to believe that his last name was "Shortman".

In the advent of The Jungle Movie's release, Arnold's surname being Shortman was mentioned on the box for his Funko POP figure, as well as in the book Hey Arnold! Guide to Relationships.

Arnold was born in San Lorenzo, in a temple of the mysterious Green-Eyed People during a volcanic eruption. His birth "silenced all of nature" and the volcano, leading the Green Eyes to believe Arnold would one day become a messiah of sorts to them.

As stated in "Married", he was born on the 7th day of an unknown month. Most fans agree that he was born on October 7th, the day the first episode of the series aired for the first time. Additionally, in a chat, Craig Bartlett said, "...Arnold is like me in that he has to think things over a long time, before coming to a decision. That I believe is a Libra characteristic. Go Libras." This implies Arnold being a Libra, which would make his birthday fall sometime between September 23rd to October 22nd, essentially confirmed he was born on October 7th.

Arnold never dates anyone prior to the The Jungle Movie, but he does have crushes (on girls). Throughout the series, his relationships are one-sided on his side.

Arnold has had two major crushes in the series: 6th-grader Ruth P. McDougal (during Season 1), and a classmate named Lila Sawyer (who was introduced in Season 2). His crush with Ruth ended in "Arnold's Valentine" after he went on a date with her and realized she wasn't his type. His crush on Lila ended when he became embarrassed after she overheard him tell his best friend's younger sister, Timberly, to help convince Lila to reciprocate his feelings in "Timberly Loves Arnold".

See Helga and Arnold. Helga has had a crush on Arnold ever since they day they met. They first met when they were little kids.

Arnold’s warm-heart and respectable and wise personality earns him friendships among many, if not most, of his classmates and school peers. His best friend is Gerald Johanssen, whose relationship dates as far back as pre-school. The pair have a distinct handshake consisting of putting two-thumbs-up fists together and wiggling the thumbs back and forth.

Arnold has other notable friendships with Eugene (which goes back to their pre-school days) Harold, Sid and Stinky.

Over the course of the series, Arnold has had a handful of voice actors. In the pilot, Arnold's voice was provided by J.D. Daniels, though when the series came to fruition, Daniels was not brought on. During Season 1 and "What's Opera, Arnold?" Toran Caudell provided the voice of Arnold, though he left the show after the first season due to his voice changing, returning soon after as Wolfgang. Phillip Van Dyke was brought on as the voice of Arnold for the second and third seasons. However, like Caudell, Van Dyke's voice also underwent changes, causing another change in voice actors (though Van Dyke would return during Season 5 to voice Ludwig in "New Bully on the Block"). In Season 4, Spencer Klein started voicing Arnold and continued to provide his voice all the way through Season 5 and the movie. The last two episodes "April Fool's Day" and "The Journal" feature Alex D. Linz as the voice of Arnold instead. His most recent actor at present is Mason Vale Cotton, voicing him in Hey Arnold! The Jungle Movie. 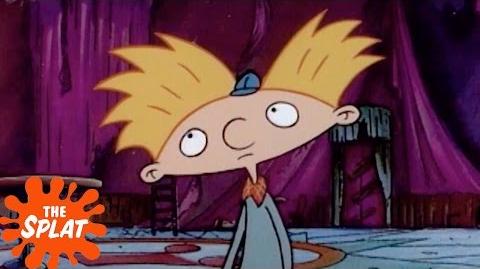 Where is Arnold Going? Hey Arnold! The Splat